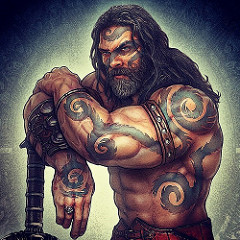 Svenson is a berserker who lost his cool at the gates of Brindinford. He was stopped by Kryss and Shael before he could do much harm. The guards took him to jail to cool off.

He later accompanied the party to found Dragonfire Dyrr, and Shael planned to set him up with Leah of Ossington, perhaps considering Svenson’s dreams of romps with Southern women a good fit for Leah’s do-what-feels-good philosophy.

While he has gotten several children on Leah since being introduced, the pair have not married, nor appear to have an exclusive relationship. Neither are their frequent flings consistently open and approved by the other partner. Svenson truly lives in a powder keg and gives off sparks.