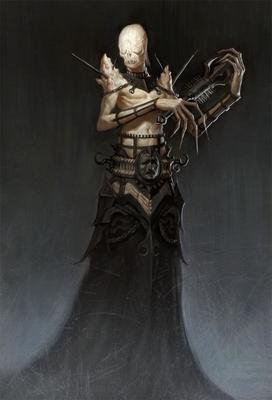 From the Ethereal Mists, sahkils watch. They slip tenuous tendrils into the dark and abandoned places of the world, infusing the mundane with dread and giving fangs to mortal imaginings. When they trespass upon the physical world, most sahkils prefer to remain veiled, corrupting nature and turning people into monsters. They revel in the awe associated with terror and hear praises in every scream. When finally their victims have been sapped, drained of their capacities to hope and to fear, the sahkil feed. Not willing to let their playthings escape to feed the cycle they once served, sahkils delight in nothing more than tearing mortal souls apart or giving rise to blasphemous undead.
The most dangerous sahkils rise to dominate their brethren as nightmare warlords. These sahkil tormentors form vast, sanity-bending realms from which only tortured sounds escape. Unique in form and objectives, these demigods gather legions of sahkil servitors, uniting them in campaigns targeting vulnerable souls, entire mortal worlds, or even rival tormentors. Regardless of their goals, sahkil tormentors are the most secretive members of the race, cloaking themselves to preserve the terror of their true faces, or sometimes to hide the beings they once were.
As sahkils viciously impede the nature of the afterlife, these gluttons of fear are widely loathed. Nearly every celestial and lawful race opposes their selfish desires, hunting them as dangerous beasts. However, they are also feared, as immortal fear can feed the sahkil as surely as that of mortals. Sahkil seem to take particular delight in bringing demons and devils to true fear.

Xibalba, the Land of Dread is the origin of sahkils, and it is where their tormentor overlords orchestrate their terrifying plans. Those who stumble upon Xibalba while traveling the Ethereal may at first think they have transitioned back to the physical world, yet in truth, Xibalba is something else entirely.
As the Ethereal borders all areas of the mortal world, sahkils can easily slip into the world of mortals through small rifts and tears in the fabric of the realm. They can sometimes even transit through dreams.
When very powerful mortals experience strong, vivid nightmares, sahkils can bubble up in the spaces where the Dreamtime rubs against the Ethereal. In the realm of Xibalba, the mortals are the ones who are visiting and treading in an alien land, yet the result is typically the same—sahkils stalk, attack, and feed, and mortals die in terror.
The entire realm of Xibalba is solid and real, but that doesn’t change the source of its matter, for every carved pillar, sinister plant, and splash of blood was formed from the focused fears and terrors of billions of mortals. As a result, raw dread suffuses every fragment of stone and every drop of water in Xibalba, and those who pay close enough attention can sense the promise of a scream of terror throughout this nightmare realm. The very essence of fright maintains the structure of Xibalba, particularly bolstered by those who are under the permanent influence of a sahkil, such as the eternal fear caused by kimenhuls.
Xibalba is dim and shadowy throughout, but the Land of Dread can be eerily quiet one moment and deafening the next with the wails of millions of terrified victims screaming out at once. The realm’s indistinct nature is itself disquieting. Trees seen out of the corner of the eye seem to twist and look at visitors, and familiar whispers periodically sound in creatures’ ears. Some report the sensation of insects crawling across their skin or a panicked, anxious feeling deep in their chests.
Each part of Xibalba is a separate study in terror. Dark and quivering veils separate this realm into subdivided concentrations of horror. Within these parts of Xibalba, visitors to the realm (especially wayward mortals and tortured captives) must contend with twisted traps, morally challenging trials, and seemingly impossible tests if they wish to make it out alive with their souls and sanity intact.
Upon first arrival, the realm appears to travelers to be dead and vacant. A creepy, seemingly abandoned and crumbling city spreads across the top of a hill surrounded by a dense forest. A sickening marsh stretches out beyond the forest on one side, and a jagged canyon cuts through the forest’s other edge. One section of the forest is frozen and extends out into a vast and lonely tundra. Another portion of the realm is blazing hot, reinforcing the fear of death and incineration in any travelers there. In the center of the city atop the hill stands a massive black stepped pyramid.
Some claim Xibalba’s central hill is threaded through with catacombs, ritual circles, torture chambers, and tunnels. The largest entrance to these chambers is through the Black Pyramid that stands at the hill’s apex. From within the Black Pyramid, sahkil tormentors plot, bicker, and dream up ever-greater nightmares to unleash upon their victims. It is also said that a passage exists between the Shadow and Ethereal in the heart of the Black Pyramid.
Escapees from Xibalba report that the realm’s massive caverns are each controlled by a different sect of terrible creatures and manifested horrors. This underground portion of Xibalba is supposedly much larger than the surface realm. In one cavern, blood constantly falls from gathering storm clouds, illuminated by flashes of purple lightning. Hurricane-force winds wail through another, filling the entire region with deafening howls that sound like the tormented cries of millions of souls. One realm consists of a massive ice-walled cavern the size of a moon, where travelers feel isolated even from those who accompany them and the nearest light or settlement appears ever on the horizon—until the viewer finds herself suddenly walking its streets.